I can hardly believe how long it has been since I have posted here. It’s ridiculous, really. Yes, I’ve been busy… but I should have prioritized this more. I will try to do better.

I don’t think I can begin to summarize everything that has been going on in the past year-and-a-half. I continue to love my ministry with First Church Unitarian in Littleton and feel very blessed.

Shortly after my last post, my wife and I (and our adult daughter — and our adorable terrier) moved around the block in downtown Lowell into our condo. I really enjoy living here still, too, so again… I feel lucky and blessed.

Like everybody else, my life has been strange since March 2020. Covid-19 has changed everything. I have been busy becoming a minor Zoom expert and YouTube expert. (I use “expert” lightly.) I’ve become a very amateurish maker of videos. None of this was stuff I learned in seminary, of course. Luckily, I mostly enjoy computers and learning new things, so it hasn’t been all bad. But I so miss my congregants… my family of origin… my friends. Big sigh. (If you want to see any of our online worship, gathering videos, and more, go to our YouTube channel.)

There are silver linings to the pandemic life. It’s great to see my wife and daughter and dog more. I’ve had time to play my guitar and bass more (though I really miss playing with my band). I’ve had time to work on new spiritual practices, and I’m beginning to do more mindfulness meditation. I want to find a way to share this with my congregation, perhaps over Zoom.

So that’s a start at catching up. I will try to post a few times a week here, to stay in the habit.

How is this pandemic treating you?

Sunday evening, June 9, I had the privilege of being one of the speakers (pictured below, courtesy Indivisible Westford) at the Pro Roe Rally at the Westford Town

Common. My remarks stressed that the majority of people of faith in this country are pro-choice, and being pro-choice is a faith-filled stance. We must do all we can to protect Roe v. Wade! There was a great turnout at the rally, including many FCU parishioners.

I said in my remarks, “I am here tonight on behalf of all people of faith in the United States who are pro-choice. Tonight, I am the symbolic reminder that there are people of faith who strongly support reproductive choice. The religious right in this country has put forward the notion that being godly or religious or having faith means that you are what they call ‘pro-life’, or what I would call ‘anti-choice’. But it’s simply not true. In fact, most Americans who are part of the faith community are pro-choice. Did you know that? It’s true! Who here tonight is a person of faith, in any religious or faith tradition, and is also pro-choice, in favor of upholding the Roe decision? See that? You are not alone! And there’s a reason for that. In short, the reason is that reproductive choice is a moral stance. It’s a faith-filled stance.”

“We people of faith who support the Roe decision (which is to say the majority of people of faith in the USA) know that people deserve to make decisions about their own bodies. We know that women and transgender persons who get pregnant should have agency over their own bodies and lives. We know that those persons who find themselves pregnant often have very compelling reasons to end those pregnancies. But really, it’s not for me to stand here and tell you what are the good reasons or the justifiable reasons to end a pregnancy. That’s the point. If it’s not my pregnancy, it’s not my choice, nor should it be. I have my moral and religious convictions, and so do each of you!”

On March 10, 2019, I was installed as the 28th settled minister of FCU since its founding in 1714. It was an incredible and joyful day! There is a video here if you’d like to see for yourself. The Rev. John Gibbons preached (“Getting the Hell out of Paradise”), and there were other wonderful speakers and lovely musical performances as well. There are so many people to thank… you will see them named at the end of the video. 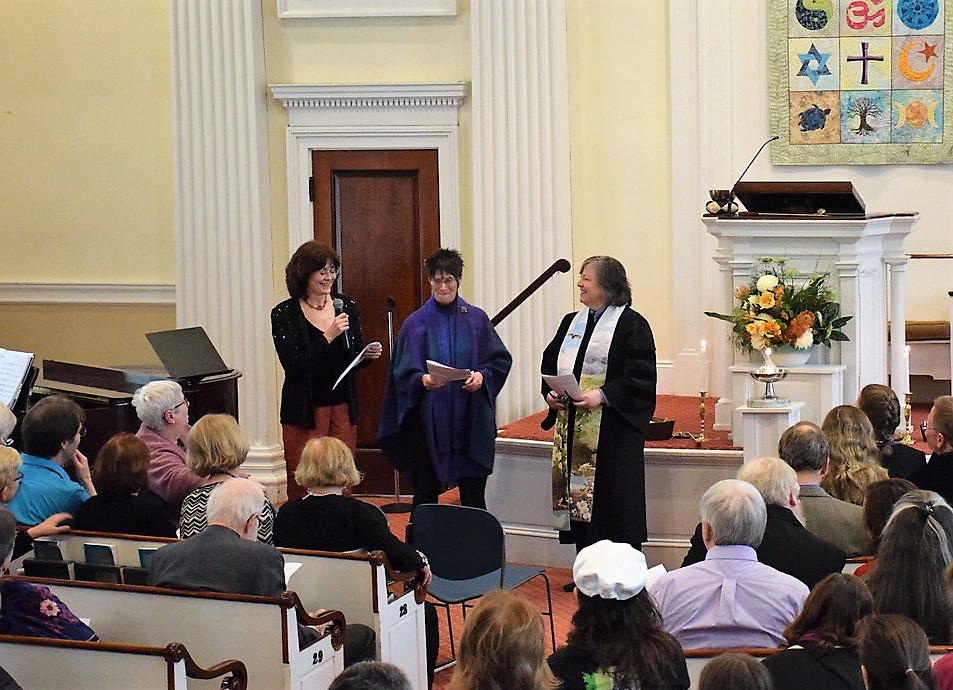 The photo to the left is of the Act of Installation, the heart of the service, when the congregation and I shared our covenant. Leading the way were our Standing Committee Co-Chairs, Alison Bentley and Lezli Whitehouse. It was one of my favorite moments in the service.

I feel so lucky and grateful to be sharing ministry with the wonderful people of First Church Unitarian in Littleton.

I will never forget the day… I hope that this shared ministry lasts for many, many years to come.

Below are some more photos from the day, with captions.

I’m very excited for my upcoming installation as the 28th settled minister of First Church Unitarian in Littleton, Massachusetts! It will be March 10th at 3:00 p.m. There will be wonderful music and some amazing ministers and other colleagues sharing their thoughts. There will be delicious food and awesome DJ music afterwards, too. It’s less than a week away!

I was raised as a Unitarian Universalist and by a father who had studied religion for many, many years. He had a B.D. (what would now be an M.Div.) from Lancaster Theological Seminary, and he was raised in the German Reform tradition (now part of the UCC). He thought he might be a minister in that tradition, but his humanistic atheism made him decide otherwise in the end.

He discovered his first UU church in Los Angeles, where I was born. We moved to Pennsylvania and the whole family joined the Unitarian Church of Harrisburg, where I attended “Sunday School”.

In addition to the obvious influences (I went to divinity school and got my M.Div., and I am still a UU), there’s a lifelong influence that also came largely from my father. And that is that, like my father, I am very interested in trying to discover as much as possible about the historical Jesus. In fact, I’m probably more interested than he ever was. I am somewhat obsessed with learning as much as I can about the historical Jesus.

And it’s not easy.

As you probably know, Jesus (apparently) never wrote anything. The documents we have about him were written some time (often generations) after his death. And the documents and points of view are contradictory, and they suggest that in some cases details were fabricated to present a particular Christology and theology. It’s very hard to know what to believe.

I’ve read the canonical New Testament, and all the gnostic gospels (I think so, anyway). I’ve read many books that explore the historical Jesus. I’m in the midst of reading all the books on Jewish Christianity that I can; it is possible that these early “Christians” (who were unitarian and thought of Jesus as the Messiah — a human prophet) were the closest to Jesus’s perspective. But really, how can we ever know? The work of the Jesus Seminar is helpful, but it’s still mostly educated guesswork.

And so, my lifetime search for the historical Jesus continues.